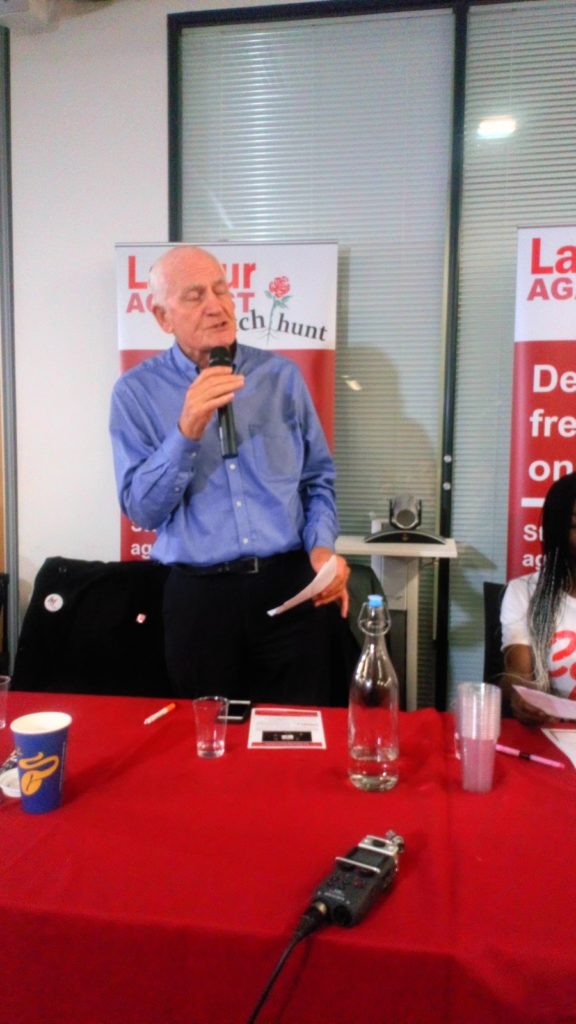 A panel of three NEC members decided on December 18 2018 not to endorse Rebecca Gordon-Nesbitt, who had been democratically selected to be the parliamentary candidate for South Thanet. More details on the case here.

Tony Mulhearn
Liverpool councillor from 1984 to 1987, expelled from the Labour Party in 1986 as part as the Militant purges 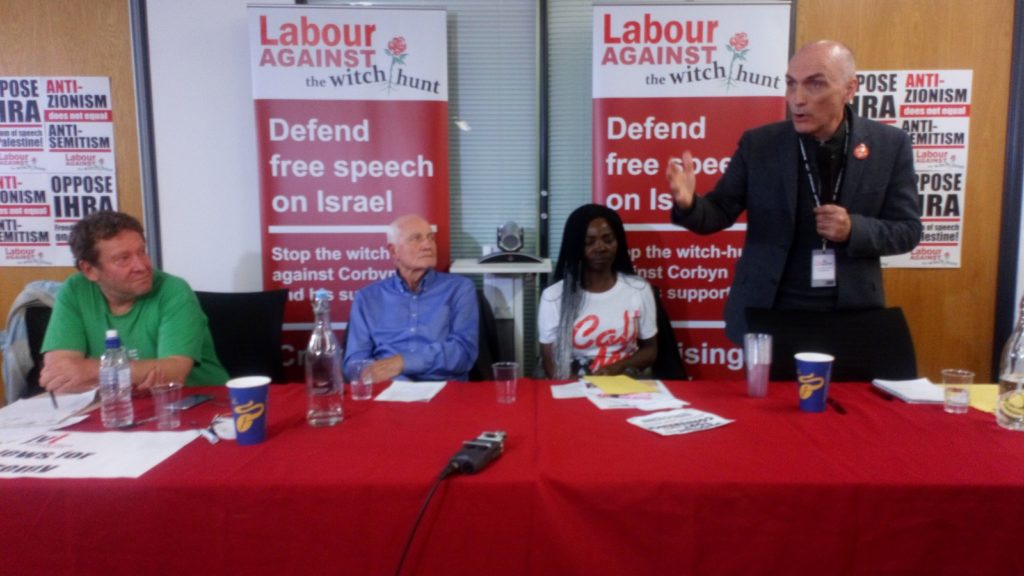 Labour Against the Witchhunt held a successful fringe meeting at the Labour conference. Stan Keable reports 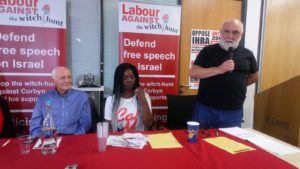 “There can be no greater injustice than anti-racists being accused of racism by racists,” the Scouse comedian Alexie Sayle told LAW’s packed fringe meeting on Sunday night. The potential for a “massive transformation” of the Labour Party and society opened up by “the miracle of Jeremy Corbyn” has overcome Alexei’s longstanding objection to voting. Having grown up in a communist family, he used to say: “Don’t vote, struggle against capitalism”. But, although Jeremy has changed all that, Alexei has not joined the Labour Party. A comedian needs to maintain their independence, he said, to be able to criticise any politician. The witch-hunters can’t expel me because I am not a member, he added, “so they can fuck off!” (The democracy we fight for, of course, includes the right of any Labour member, comedians included, to criticise all Labour leaders.) 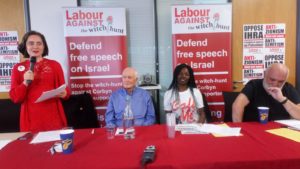 Jewish Voice for Labour’s Jo Bird, newly elected four weeks ago as a councillor in Birkenhead, pointed out that she and her comrades had been canvassing for weeks, talking to people about all manner of issues, but “no-one raised the issue of anti-Semitism on the door”. She was appalled by Birkenhead MP Frank Field. He rounded on the rank-and-file party membership within his constituency. He invented accusations of anti-Semitism and bullying. To all those party members falsely suspended and expelled, she said: “You are owed a huge apology. On behalf of the party, I am very, very sorry.”

That moving apology became particularly poignant when 73-year-old Bob Walker, the youngest of the ‘Garston 3’, described how three disabled pensioners were expelled for merely attending a meeting of the Trade Unionist and Socialist Coalition – to discuss socialism. Gerry Tyrell, Tony Lock and Bob were rewarded for their tireless work of knocking on doors and delivering leaflets in all weathers during the 2017 general election campaign by being expelled. They were not told the names of their accusers or the evidence against them. Nor was there any hearing or right of appeal. LAW demands due process before any disciplinary sanction is taken. 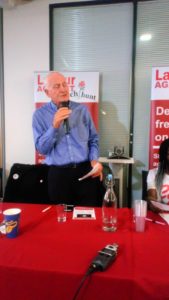 Ex-Liverpool councillor Tony Mulhearn called on Jeremy Corbyn and John McDonnell to stand up to the witch-hunters: “No more apologies, no more retreats. When you apologise, you are accepting you did something wrong.” He called out Andrew Marr for the bias he showed that morning while interviewing Corbyn, insistently cross-examining him about anti-Semitism allegations for more than 20 minutes. “Jeremy should have asked Marr who prepares such questions for him”, he said. Moreover, Corbyn should have asked: “Why don’t you show pictures of me on anti-racist demonstrations?” and “Why are Jews who support Jeremy never interviewed?” The smear campaign is “producing fear among Jewish people”, Mulhearn added.

Recalling the “ridiculously long list of charges” he faced in his own expulsion in 1986, comrade Mulhearn reminded us of how that earlier witch-hunt had been politically driven by the “bloated toad” Neil Kinnock. He insisted on getting people expelled regardless of the facts. “A witch-hunt is irrational”, said Tony, “because the decision has already been made”. At that time, John McDonnell had stood firm in his defence, but is now singing a different tune: “We need to be conciliatory, we are a broad church.” As LAW vice-chair Tony Greenstein commented: “Even the broadest church expels atheists. The ‘atheists’ in our party are those who are not, and never have been, socialists.”

Chairperson Annyana Ndukwe of Liverpool LAW and Grassroots Black Left read out a solidarity message from Asa Winstanley of Electronic Intifada, who was unable to join the panel of speakers:

Despite the new leftwing general secretary Labour has, the party bureaucracy is still disciplining members on entirely fallacious pretexts. One comrade in Brighton showed me a letter she received this very month from Labour’s head of complaints, Sophie Goodyear, warning her that several “provocative” tweets she’d allegedly written in 2016 had “caused offence” and that such “abuse” would “not be tolerated” in Labour … One of the three tweets cited was simply the comrade posting the headline and link to my April 2016 article, ‘How Israel lobby manufactured UK Labour Party’s anti-Semitism crisis’ without comment … it seems that at least some in Labour HQ are treating critical journalism like Electronic Intifada as banned publications. (Full text here)

Tony Greenstein, expelled in February 2018, told us how he had also been suspended from the party in 1992 by then general secretary Larry Whitty, now a Lord – “well rewarded for services rendered to the capitalist state”, as comrade Mulhearn put it. Comrade Greenstein emphasised that the witch-hunt is “not about anti-Semitism, it is about removing Corbyn as leader”. 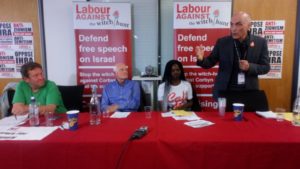 Chris Williamson MP, introduced by comrade Ndukwe as “one of the few MPs who is a true socialist”, confronted the IHRA definition of anti-Semitism adopted by the party, declaring that he often describes Israel as an apartheid state. He compared Israel’s treatment of Palestinians to the fate of the Cherokees in America. Denouncing the “terrible injustice” being done to Jackie Walker, he condemned the way Marc Wadsworth had been “demonised as a bigot” for merely “asking a question at a press conference”.

Comrade Williamson, advocating mandatory reselection, quoted Ed Miliband’s advice: “If we trusted the members more, we would not have made so many mistakes”. And he laid into Neil Kinnock’s view that the party belongs to the MPs, not the members. As for those MPs who object to reselection on the grounds of employment rights: “It ain’t a job, mate! You are elected as a representative of the party and the people who elected you.”

Calling on Corbyn and McDonnell to wake up and confront the rightwing witch-hunters, comrade Williamson said McCarthyism, like all bullying, only stopped when people stood up to it. “The monster is getting bigger. Stop feeding the beast!” 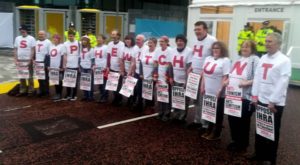 LAW has also been running a number of stalls in Liverpool, organised a successful emergency lobby of the NEC and the showing of Jackie Walker’s ‘The Lynching’ with actress Jo Martin taking over Jackie’s role.