The chair of the meeting, Deborah Hobson, began by calling for a minute’s silence in honour of the 58 Palestinians killed and thousands injured in the latest Israeli atrocity. An atrocity defended and excused by Donald Trump, Binyamin Netanyahu … and Labour Friends of Israel.

Mike Cushman (Jewish Voice for Labour) was not alone in pointing out that there can be fewer more eloquent testimonies to the nature of the Israeli state than the harrowing events in Gaza. Certainly, it exposes the foul apologetics of the Labour right and their Zionist allies, and destroys the notion that Israel attracts the huge amount of condemnation that is does because the left – its most trenchant critics – is ‘anti-Semitic’. Far from being a source of strength, the Labour right’s support for the Zionist state – and the United States’ reactionary strategic goals in the region – can be turned into a huge weakness for this scab faction in our ranks.

While the top table was perhaps a little heavy with speakers (of varying degrees of quality and political acumen, it should be noted) – there was a real energy and combative confidence. This was perhaps displayed best in Jackie Walker’s defiant anecdote about her rejoinder to a characteristically stupid tweet from the wretched Wes Streeting MP. Apparently, he challenged her to meet him in debate in any synagogue in north London. OK, she told him – where and where then, Wes? Predictably, however, the man has gone very quiet …

Moshé Machover reminded us of the almost comically irrational nature of the provocations coming from the Labour right, their allies in the mainstream media and various apparatchiks in the Israeli state. He posed a “trick question”: “Are there anti-Semites in the Labour Party?”

Well, yes, given the current numbers in our organisation (570,000-plus) from all sorts of backgrounds, there must be. The comrade (a renowned mathematician, let us not forget), stated that it would be statistically “astounding” if there were not. The party will also have its statistically ‘fair’ share of paedophiles. The point being that if the Labour right and its venal allies thought it could gain political traction by smearing the left as a herd of paedophiles, they would. The right gives “fuck all” for truth, principle or any other such annoying impediment, comrade Machover stated.

Moshé illustrated this same observation via a sideways detour. There is – apparently – a tiny number of spotted hyenas in Norway (in zoos). However, if you hear of a spotted hyena trackers’ expedition – organised with an extravagant disregard for the huge amount of time, energy and money expended – a rational conclusion to draw might be that these people have a thing about Norway, rather than the spotted hyenas.

It was a fun way to set the tone for the meeting. And the atmosphere of aggressive levity was added to by comedian Alexi Sayle’s amusing introductory spiel for Marc – he does seem to be getting some of his political mojo back via this battle; the unhinged accusations against the left must be providing the bloke with material for years to come. Many speakers also ridiculed the laughably flimsy charges against Marc Wadsworth and other comrades, such as Ken Livingstone, Jackie Walker and Tony Greenstein.

A recurrent theme during the regrettably short space allocated for questions and contributions from the floor was the need for Labour Against the Witchhunt to become a mass campaign that can rally not dozens, but thousands, outside Labour’s Victoria Street HQ. That means building local organisations.

There were some gently regretful criticisms of Corbyn’s and the core LP left leadership’s passivity to – even accommodation with – this witch-hunt. This generosity was not all-encompassing – on the strength of this meeting and others I have attended over the last year or more, there are now very few on the left with any compunction about laying into Momentum nationally. The local groups can be good, even very good, but the national organisation and its ‘CEO’, Jon Lansman are deeply discredited. 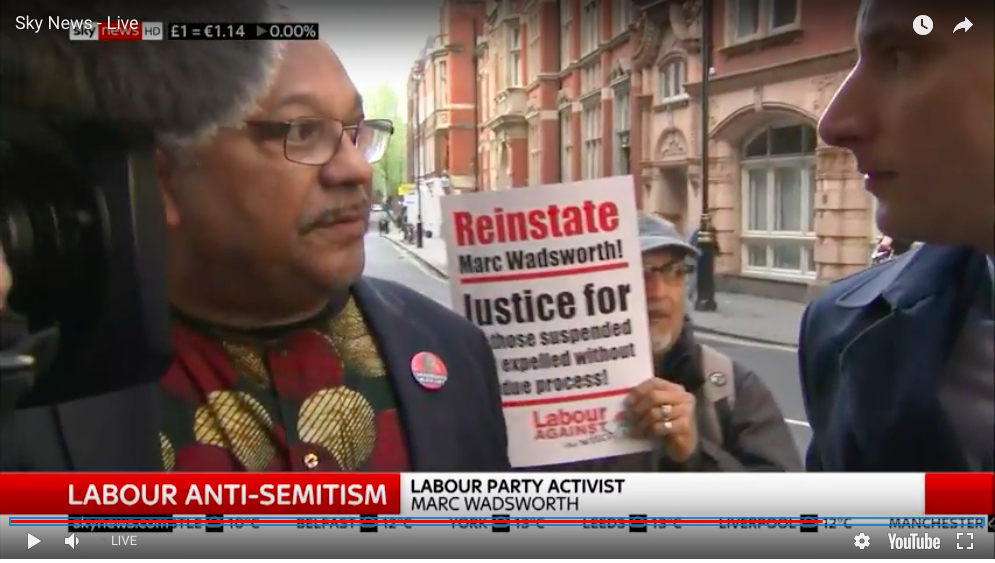 Great turnout today at the Labour Party expulsion hearing of anti-racism campaigner Marc Wadsworth outside Church House. Credit to Chris Williamson MP who spoke as a witness on behalf of Marc, while Ruth Smeeth MP was ‘accompanied’ into the hearing by a number of right-wing MPs.

Protestors appealed for due process to be applied – which would have to lead to Marc being totally exonerated and reinstated to full membership. He is one of the many victims of the witch-hunt against Jeremy Corbyn supporters. Solidarity, comrade Marc! His hearing is scheduled to last two days. 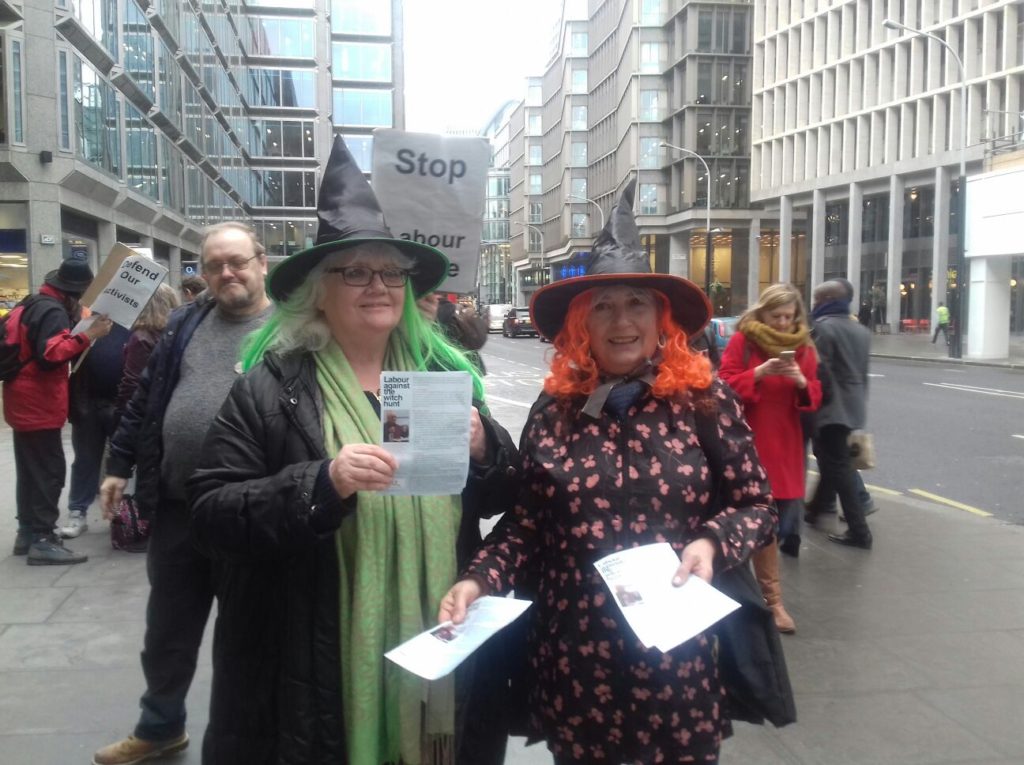 Around 40 supporters (and a few witches) showed up today, January 23, to help us lobby the Labour Party NEC to demand an end to the witch-hunt against left-wing and pro-Palestinian Labour members. Expelled and suspended members (amongst them Jackie Walker, Marc Wadsworth and Tony Greenstein) spoke to NEC members and lots of press. END_OF_DOCUMENT_TOKEN_TO_BE_REPLACED