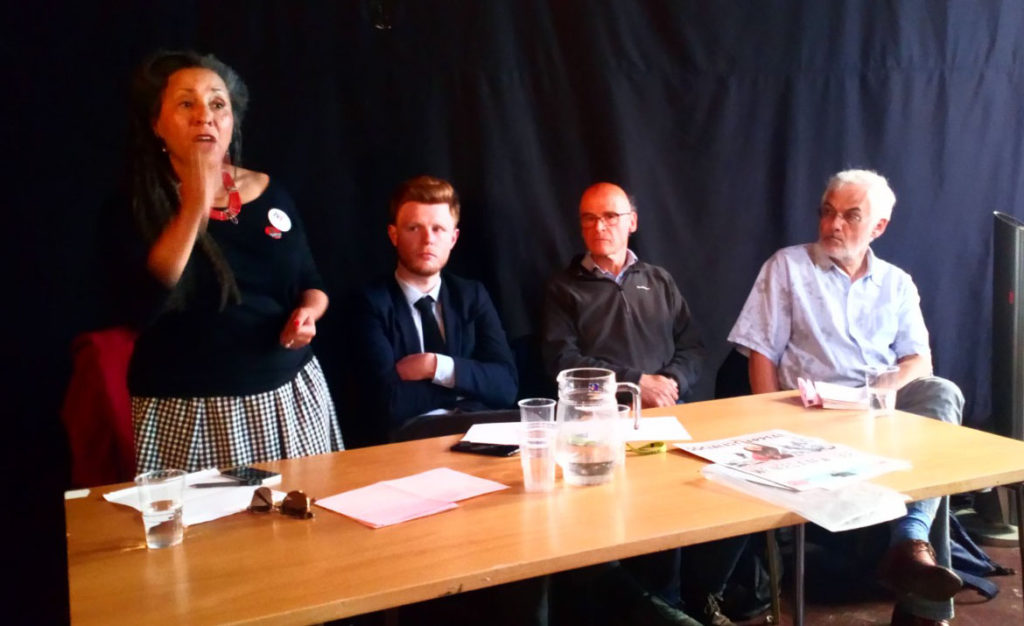 Labour Against the Witchhunt organised a fantastic meeting in Sheffield yesterday, as part of the national ‘Justice4Marc’ speaking tour with Marc Wadsworth. The meeting was packed, with around 80 people cramming into the wonderful DINA arts venue – and the staff working there last night got very involved, too! We heard from:

Unfortunately, there was a bit of friction at the start of the event as Marc Wadsworth objected to the locally agreed chair Lee Rock (who runs Sheffield Left List, which organises the Labour left across all six Sheffield CLPs and had about 30 supporters at the meeting). Marc insisted on a particular black member of Momentum Sheffield chairing instead.

However, myself, Jackie Walker and others objected to her, as at the January AGM she had been one of the instigators of a motion to exclude from Momentum Sheffield all non-Labour members – including, explicitly, those who had been expelled from the Labour Party for unjust reasons. The AGM motion was carried by a very small margin and now affects about a dozen former members. They can attend some (not all) meetings of Sheffield Momentum, but are not allowed to vote or be elected to any positions – i.e., they have no membership rights.

Huge credit to Jackie Walker, national chair of LAW, who pointed out very patiently how this local decision – which is almost unique among local Momentum groups – was in fact an integral part of the witch-hunt against the Labour left and that she would not accept any chair who had voted in favour of it. As a compromise, Lee Rock agreed to vacate his position and Jackie chaired the meeting instead. Marc decided at that point to leave the top table and made his contribution from the floor. 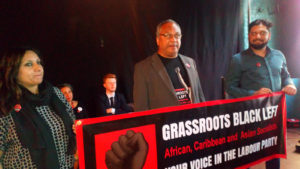 It was very heartening to hear so many speakers get up and make the connection between the rightwing witch-hunt of Corbyn supporters and the agenda of the pro-Israel lobby, both of which want to stop the transformation of the Labour Party into a democratic, anti-war party. Speakers criticised the party leadership’s policy of trying to appease those forces: “With every step back that we take, there will be a void. And the right is filling this void”, as comrade Shaw put it.

My favourite contribution came from John Dunn (a leading member of the Orgreave Truth and Justice Campaign) who, in a rousing speech, ripped into Momentum owner Jon Lansman for not standing up to the witch-hunt in the Labour Party, fostering the lie that there is a huge problem with anti-Semitism in the party. Instead of offering solidarity to the thousands suspended and expelled, Lansman has become complicit in the witch-hunt.

In my own contribution, I mentioned the need for socialists to stand up to injustice, particularly in our own organisations. “When we see a rule that is clearly unjust, as with Momentum’s constitution, surely we do not simply accept it. As socialists, we fight against it and refuse to implement it” – something, that of course, most Momentum branches have done. Jewish Voice for Labour, too, does not recognise as legimitate the expulsions and suspensions from the Labour Party for political reasons and admits those affected as full JVL members.

Another comrade reported the huge strain her suspension had put her under. Her ‘crime’: she had shared a meme of a DWP job centre sign, where the words had been replaced with ‘Arbeit macht frei’ (the slogan above the Auschwitz concentration camp). It takes some mental contortion to see how this could be described as anti-Semitic. Clearly, it is a pointed criticism of the Tory government’s hounding of disabled and vulnerable people.

But of course, in today’s poisonous police state atmosphere, anything is possible. For example, another comrade reported on the case of Stan Keable, who this week was sacked from his job, after a private discussion with a Zionist at the ‘Enough is Enough’ protest in March had been filmed and published online: He tried to defend as historically accurate Ken Livingstone’s claim that the early Nazi regime did indeed work with the Zionists in trying to transfer Jews to Palestine.

Many speakers naturally brought up the unfortunate resignation of Ken Livingstone from the Labour Party. Marc Wadsworth suggested that Ken might have resigned in order to support Marc’s own campaign for reinstatement, but I am uncertain he convinced many people in the room of this theory. It seems far more likely that Livingstone has indeed been pressured and persuaded by Jeremy Corbyn to resign. After all, Corbyn immediately congratulated him on this decision – a very unhelpful political move, as many in the room felt, and lacking in solidarity.

Jackie Walker reminded comrades that in the 1980s, during the purge of Militant, an earlier incarnation of ‘Labour Against the Witchhunt’ was chaired by no other than Jeremy Corbyn. “I think if he was not the party leader today, he would probably be sitting on this platform right now”, she said.

It was a boisterous meeting with a very healthy fighting spirit. At the end, Jackie encouraged everybody to not give up the fight. “I will not resign. I have had two years of shit being thrown at me, but it is hugely important that we all stay – or try to stay – in the party and fight.” She encouraged comrades to become conference delegates, stand for positions in their local branches and CLPs, get involved in Sheffield Labour Left List – and to join Labour Against the Witchhunt, of course.