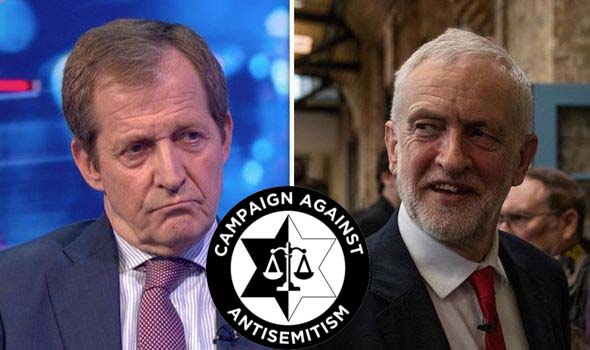 It is unfortunately no surprise that the Equalities and Human Rights Commission has opened an official investigation into the Labour Party.

Any kind of neutral body would have had to immediately dismiss the complaints lodged by the Jewish Labour Movement and the so-called Campaign Against Anti-Semitism. These organisations have no interest in fighting racism: their only purpose is to get rid of a certain Jeremy Corbyn. They have been blatant in their political opposition to the twice elected leader of the Labour Party – and have actively plotted against him from day one. (Click here for Tony Greenstein’s blog who looks at the reactionary politics of the CAA).

According to The Guardian, the EHRC will investigate “whether the party has unlawfully discriminated against, harassed or victimised people because they are Jewish” and if “the party and its employees have committed unlawful acts of discrimination or failed to respond to complaints of unlawful acts in an efficient and effective manner”.

If there has been unlawful discrimination by Labour against Jewish people, it is against Jewish anti-Zionists. Many of those, as well as black members, are involved in the struggle for Palestinian rights, which explains the disproportionate number of expulsions and suspensions of black and Jewish comrades.

However, the recent victory of Stan Keable in his employment tribunal shows what happens when these types of cases are put before a real judge: they are laughed out of court. Stan was fired for stating that in the 1930s the Zionist movement collaborated with the Nazi regime – a well documented, if shameful, historical fact. The judge defended the right to express anti-Zionist views – even if they offend people.

Labour HQ should call this campaign what it is: part of the rightwing witch-hunt against Jeremy Corbyn and his supporters. The Labour leader remains an unreliable ally from the ruling class’s point of view, especially given his strong support for the rights of Palestinians.

The expulsion of Alistair Campbell, though welcome, does not change the overall picture. MPs like Margaret Hodge, Louise Ellman and Tom Watson insult, disrupt, make bogus accusations and work hand in glove with the capitalist media – with no repercussions coming their way. Those making false charges ought to face justice at last.

Their outrageous behaviour goes unpunished because of the short-sighted and futile attempts to appease the right. This can only undermine the Corbyn leadership and play into the false ‘Anti-Zionism equals anti-Semitism’ narrative.

On March 27, the day after he attended the counter demonstration in Parliament Square, organised by Jewish Voice for Labour, Labour Against the Witchhunt’s secretary Stan Keable was suspended from work by Hammersmith and Fulham council. The suspension letter states that there are “serious allegation(s) which, if substantiated, could constitute gross misconduct under the council’s disciplinary procedure” and which “could result in your dismissal from the council’s service”.

Stan, who is secretary of Labour Party Marxists, has not yet been informed of the exact nature of the alleged “inappropriate comments”. However, it seems very likely that they relate to a short video clip tweeted by BBC Newsnight editor David Grossman. It seems that Grossman – without asking for permission – filmed Stan on his mobile phone while he was talking to a supporter of the anti-Corbyn demonstration.

Like other LPM comrades, Stan had approached the Zionists with the intention of engaging with them. He handed out Labour Against the Witchhunt leaflets and spoke to numerous people. Most discussions were friendly, if a little one-sided: “People on the ‘Enough is Enough’ demonstration were a mixture of Tories, Labour Party members and ex-members,” says Stan. “They told me they were there because of the ‘huge problem’ of anti-Semitism in the Labour Party, but when I asked if they themselves had experienced discrimination, they could not give me any concrete examples.”

The conversation in question was several minutes long “and the guy and I shook hands afterwards”. The 105 seconds that Grossman has published – again, without even asking for permission – are entitled: “Anti-Semitism didn’t cause the holocaust and Zionists collaborated with the Nazis”. As we show in the transcript below, this is seriously misleading. But, as you would expect from such a headline in the current climate, the short clip has caused quite a stir on social media.

END_OF_DOCUMENT_TOKEN_TO_BE_REPLACED

April 3, 2018By admin campaigning, suspensions and expulsions Campaign Against Anti-Semitism, Enough is Enough, Jewish Board of Deputies, March 26
Recent Posts
Categories
Sign up to our newsletter