Labour Against the Witchhunt has become aware a new wave of suspensions and expulsions – often for the most absurd reasons. For example, we have seen the full suspension letter the Labour Party sent to Becky Massey, an activist in the Palestine Solidarity Campaign and member of the executive committee of Brighton City Labour Party which was then disbanded (as featured in the leaked report). The single charge  is her tweet about Chris Williamson, posted six months ago. It reads: “The 99% of people will have the best friend in Chris Williamson as an MP who, if reelected, will work for them. ‘I resigned from Labour to spend more time fighting for socialism.'” 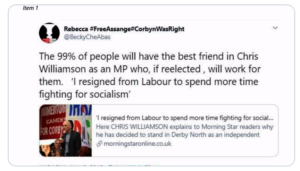 In our view Chris Williamson was wrong to leave the Labour Party, but we can understand why he did so – he had been vilified, smeared and hounded by the press, without a single parliamentary ‘colleague’ coming to his defense (including Richard Burgon and the rest of the so-called Socialist Campaign Group).

Rule 2.1.4. of the Labour Party rule book is of course famously ‘elastic’:

This “support” is usually interpreted as calling for a vote for a candidate who is standing against a Labour Party candidate. In Becky’s case however, it has been interpreted as ‘tweeting in a supportive manner’. Despite the fact that she fully cooperated and explained that she did not actually call for a vote for Chris, she was expelled after two weeks – without even a hearing.

On the other hand, a number of right-wing Labour honchos who actually called on people to vote for the Liberal Democrats or even the Tories are left untouched. And we are still waiting for any disciplinary measures to be taken against those officials at Labour Party HQ who have been shown in the leaked report to have run an active campaign of sabotage against the party during Jeremy Corbyn’s leadership.

Asa Winstanley of Electronic Intifada speculates that Keir Starmer and Angela Rayner were given a list of names by the Jewish Labour Movement in a meeting earlier in the week. This certainly would go some way to explain the latest wave of suspensions of left-wingers. Mike Cushman, membership secretary of Jewish Voice for Labour, received a ‘notice of investigation’ this week. Another Palestine supporter victimised is David Miller, professor of political science at Bristol University. He was suspended for pointing out that Keir Starmer was “in receipt of money from the Zionist movement, from Trevor Chinn”. This is of course factually correct. Miller is also correct in calling this latest wave a “targeted harassment of socialist members”. Clearly, the right-wingers at the top of the Labour Party will not stop their witch-hunt until all traces of socialism are eradicated. 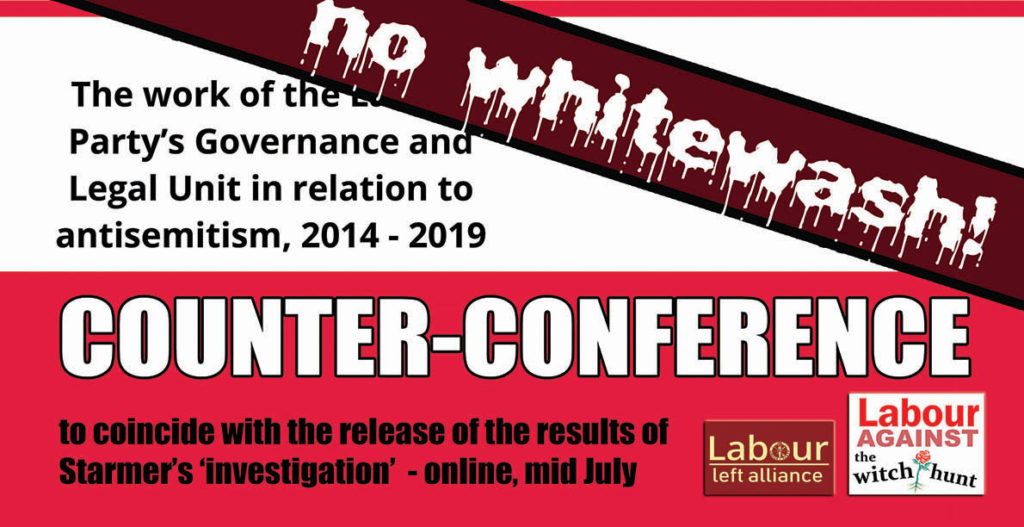 Publicity is our main weapon in this extremely uneven fight. The steering committee of Labour Against the Witchhunt has decided to call a conference to coincide with the planned release of Keir Starmer’s “investigation” into the leaked report in July. No doubt, it will be a whitewash, focusing on who leaked it rather than the substance of the right-wing smears and campaign of sabotage against Jeremy Corbyn. But we also want to look at the many mistakes made by the Corbyn leadership: The report shows that they decided to support the lie that the Labour Party is overrun by antisemites. They sought to appease the Israel advocacy groups and the self-appointed leadership of “the Jewish community” and  behaved as though they believed this lie. In the process they displayed an inability to recognise real antisemitism, while eagerly trying to get rid of Jackie Walker, Tony Greenstein, Ken Livingstone and Chris Williamson, none of whom can be accused of even a trace of antisemitism.

Details tbc, but please click here to register for the Zoom event.