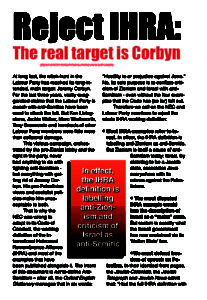 You can download the leaflet here in PDF format.

At long last, the witch-hunt in the Labour Party has reached its long-intended, main target: Jeremy Corbyn. For the last three years, vastly exaggerated claims that the Labour Party is awash with anti-Semites have been used to attack the left. But Ken Livingstone, Jackie Walker, Marc Wadsworth, Tony Greenstein and hundreds of other Labour Party members were little more than collateral damage.

This vicious campaign, orchestrated by the pro-Zionist lobby and the right in the party, never had anything to do with fighting anti-Semitism – but everything with getting rid of Jeremy Corbyn. His pro-Palestinian views and socialist policies make him unacceptable to both.

That is why the NEC was wrong to adopt in its Code of Conduct, the working definition of the International Holocaust Remembrance Alliance (IHRA) and most of the examples that have been published alongside it. The intent of this document is not to define Anti-Semitism – after all, the Oxford English Dictionary manages that in six words: “Hostility to or prejudice against Jews.” No, its sole purpose is to conflate criticism of Zionism and Israel with anti-Semitism – even without the four examples that the Code has (so far) left out.

Therefore we call on the NEC and Labour Party members to reject the whole IHRA working definition:

There is still time to bring this witch-hunt to an end. But Jeremy Corbyn and his allies have to stand up to the enemies of the democratic Labour left:

But democracy and free speech are essential in the struggle to transform our party and society.