However, in what must be one of the most bizarre twists in Labour’s witch-hunt crisis, Chris remains suspended from the party! A double suspension! How much more Kafkaesque can this witch-hunt get?

Why? Because the party issued him on September 3 – one week before the court hearing – with another suspension. In Chris’ words, this third suspension was “based on a series of preposterous allegations that I answered fully and swiftly.”

The judge ruled that there was “nothing in the new allegations, the timing of the letter of 3 September or the decision to suspend that entitles me to take the view upon the papers that the Labour party is acting either unfairly or other than in good faith”. He added: “I therefore refuse relief in respect of Mr Williamson’s recent re-suspension. The new disciplinary case must run its course” (the full judgement is available here).

This new suspension is not just absurd, it shows to what length the Labour bureaucracy will go in its futile campaign to try and appease the right in the party. Presumably, Chris’ case will now be referred to the party’s National Constitutional Committee. Despite various reforms, this is still dominated by the right, a section of the union bureaucracy and a weak left that gives in to the witch-hunt.

No doubt, the idea is to keep Chris suspended for as long as possible: Should a general election be called soon, he will not be able stand as a Labour Party candidate.

How many more Corbyn supporters and socialists will have to be thrown to the wolves before Labour Party HQ understands that the right will never stop, they will never be appeased!

Jackie Walker, Marc Wadsworth, Ken Livingstone, Pete Willsman and the many hundreds of Corbyn supporters who have been smeared, investigated and expelled – they are nothing but collateral damage. The real target of the campaign is, of course, Jeremy Corbyn himself.

The right will not accept him as leader of the Labour Party, let alone prime minister. They will continue their campaign of sabotage, because he remains unreliable from the ruling class’s point of view, especially given his s 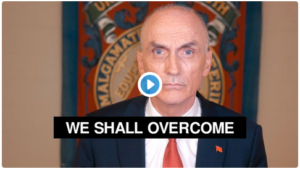 trong support for the rights of Palestinians.

It is high time that Jeremy Corbyn and the rest of the Labour leadership stand up and say: Enough is enough!

Click here to see Chris’ brilliant video explaining the outcome – and making a scathing critique of the “Labour bureaucracy”.

Chris Williamson was first suspended by the Labour Party on 27 February 2019, following a vicious campaign led by the right in and outside the Labour Party. His crime? A so-called “pattern of behaviour”, with the following three main charges:

On 26 June 2019, Chris’s suspension was lifted by a disputes panel of the Labour Party’s National Executive Committee (NEC). But this was immediately followed by a mass hysteria in the right-wing press. Tom Watson organised – in record time – a public petition, signed by 70 right-wing MPs and peers, demanding Chris’ re-suspension. This is when Keith Vaz ‘remembered’ that he had taken some mysterious medication and demanded that his vote on the NEC disciplinary body (in support of Chris’ reinstatement) should be declared null and void.

We don’t believe a word of it! His U-turn was clearly motivated by the pressure coming from the right inside and outside the party. Vaz quite rightly judged that the evidence did not warrant Chris’s ongoing suspension or his referral to the National Constitutional Committee (which is still dominated by the right).

Then, on June 28, following a concerted two-day media campaign by the same forces who had engineered his suspension, Chris was ‘re-suspended’ by the party – a move without precedent in Labour’s history. He was then referred to the Party’s NCC, where his expulsion would almost certainly be a foregone conclusion.

NEC disciplinary panels have delegated powers and make their decisions in the light of material presented to them by party staff and independent advice from qualified legal counsel. Referring the panel’s decision back to the NEC as a result of partisan political lobbying is unacceptable and amounts to a violation of the natural justice that members have a right to expect in the party’s disciplinary procedures.

Chris Williamson is the only MP who has stood up for all those who have been witch-hunted on false or exaggerated allegations of anti-Semitism or ‘bringing the party into disrepute’. With his immensely popular ‘Democracy Roadshow’ he brought hope to many members that the party could be radically and democratically transformed to act in the interests of the many, not the few. That is why he has become a target of the right – he is a thorn in their side.

If we allow this new suspension to stand – or even turn into an expulsion – this will not only be a great injustice to Chris, but to all of us!