No, Rebecca Long-Bailey, you SHOULD NOT sign up to the 10 pledges by the ‘Board of Deputies’!

These outrageous demands, pushed by a bunch of Tory-supporting, pro-capitalists, should not just be ignored by any candidate running for the leadership of the Labour Party – but rejected outright as inappropriate interference. Email Rebecca if you think she should change her view urgently: rebecca.longbailey.mp@parliament.uk

The worst of the 10 pledges are:

Pledge 2: Make the disciplinary process “independent”. Independent of whom? The members? Hand it over to the Jewish Labour Movement or the BoD, perhaps? No, Labour Party members should be judged by their peers only. Governance and Legal (formerly the Compliance Unit) – still staffed by many employees hired by witch-finder general Iain McNicol – should be abolished and replaced with a democratic and transparent body, elected by Labour Party members.

Pledge 3: Handing over confidential details of ongoing disciplinary cases to “Jewish representative bodies” – and they don’t mean the Jewish Voice for Labour, of course, which is referred to as “fringe organisations and invidividuals” in pledge 8.

Pledge 4: A lifetime ban from membership for “repeat offenders, such as Ken Livingstone or Jackie Walker.” Ken Livingstone incidentally resigned; whereas Jackie was not found guilty of anti-Semitism, but “bringing the party into disrepute”. Not that the BoD cares.

Pledge 5: “Any MPs, peers, councillors, members or CLPs who support, campaign or provide a platform for people who have been suspended or expelled in the wake of antisemitic incidents should themselves be suspended from membership.” This is pure censorship that should be rejected by anybody who wants a critical, engaged and thinking membership.

Pledge 7: Handing training on anti-Semitism to the Jewish Labour Movement, a Zionist organisation that has been instrumental in weaponsing the miniscule number of anti-Semitic incidents in order to smear Jeremy Corbyn and the left. They have purposely conflated anti-Zionism (criticism of Israel) with anti-Semitism (hatred of Jews). 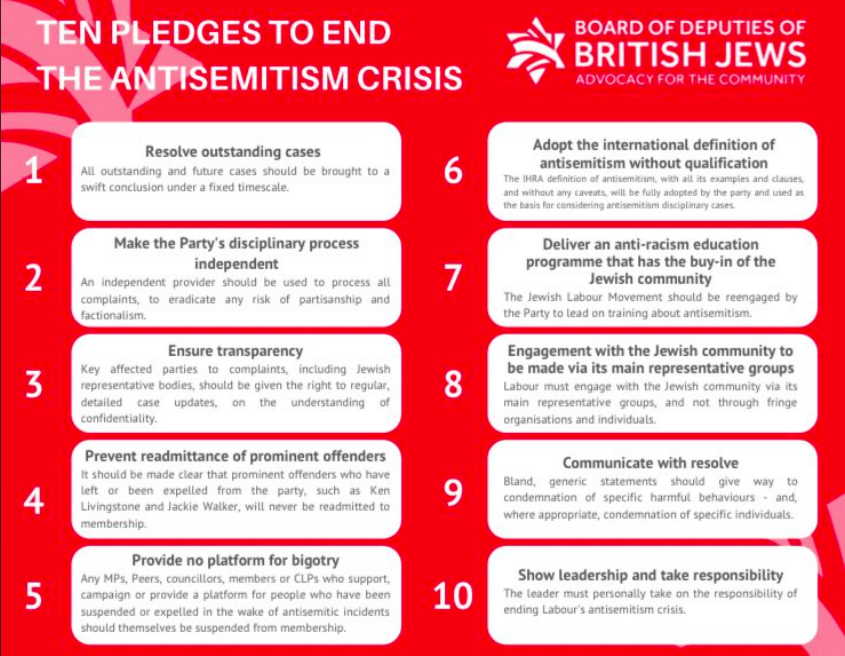