We demand a full investigation into the witch-hunt and the election campaigns!
Now all disciplinary cases of the last five years must be reviewed!

As experienced activists in the Labour Party, we knew that the right in the party was plotting against Jeremy Corbyn and his supporters from day one. We knew, because we were the victims of their wrongful suspensions, their expulsions and their public smears and lies, all based on the flimsiest of evidence. 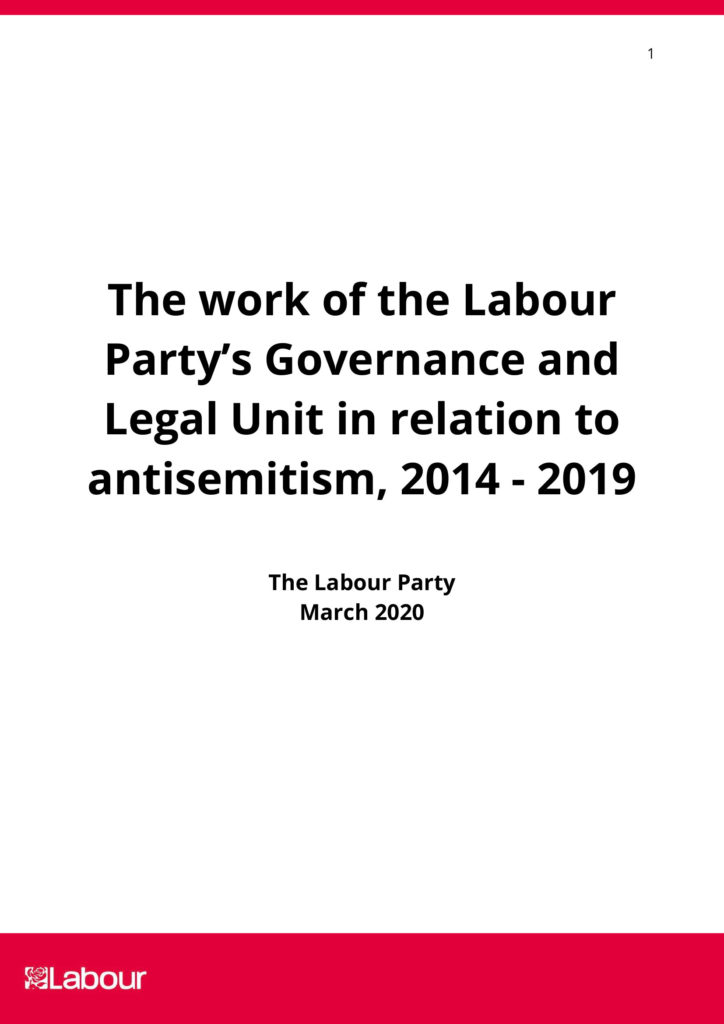 The report ‘The work of the Labour Party’s Governance and Legal Unit in relation to antisemitism, 2014 – 2019’,  produced in response to the investigation by the Equality and Human Rights Commission, now gives us irrefutable proof of the plotting and outright sabotage committed against Corbyn and the hundreds of thousands who joined the party to fight for socialist and democratic change.

It is a crying shame that this report was produced only in the last days of Corbyn’s leadership. It is based upon primary evidence showing serious wrong-doing by senior party officials. A once-in-a-lifetime opportunity for the left to radically transform the Labour Party and effect progressive change was ruined by the right in the party.

At the same time, supporters of Corbyn were vilified and slandered, their voices silenced and their votes nullified. Unfortunately, it appears that this was sometimes done with the knowledge and occasionally even with the participation of the Corbyn leadership, as in the expulsions of Jackie Walker and Chris Williamson.

Keir Starmer must ensure the immediate publication of the report and a full enquiry into the facts:

*** The report describes how “the pro-Corbyn left decisively won” at Brighton CLP’s annual general meeting (AGM) in July 2016. Afterwards, two high-ranking Labour officials discussed how to overturn the result: “I say act now and worry about [rules and legal issues] later, so long as we don’t do something that’ll end up f[***]ing everything else up.” Party officials then overturned the AGM’s decisions, the old executive was restored and the local party split into three separate CLPs. (p113)

*** Labour officials discussed how to continue the unlawful suspension of Wallasey CLP, where the left “are properly organised” – in order to save the local right-wing MP, Angela Eagle, from being challenged. (p114)

*** We read that, “in many cases party members at all levels request the suspension of another party member as a way of escalating or indeed resolving a dispute. There is a wrongly-held view that political opponents can be ‘taken out’ of a contest or stopped from attending meetings by making a complaint with the intention of achieving a suspension of that member.” (p533) Clearly, this is exactly what has been taking place, even as recently as during the March 2020 NEC by-election. Half a dozen of the candidates were suspended in the middle of the contest, before any investigation was launched.

*** Sam Matthews, then head of Disputes, was able to single-handedly suspend Glyn Secker (secretary of Jewish Voice for Labour) as recently as 2018 – the case was so weak that he had to be reinstated almost immediately: Following on from a report produced by the disgraced right-wing Corbyn critic David Collier into the Facebook group ‘Palestine Live’ (of which Corbyn was a member), “documentary evidence shows that it was only because James Schneider, Jeremy Corbyn’s spokesperson, urged [Sam] Matthews to take action, that the report was examined at all. Of all the examples of extreme antisemitism in the report, GLU picked Glyn Secker, even though the report did not contain allegations of antisemitic comments by Secker and the report stated ‘Glyn Secker has had minimal interaction on the site’.” (p428)

*** The ‘Disputes’ unit desperately looked for reasons to expel the prominent Israeli Jew Moshé  Machover. Because of his background, they found it difficult to charge him with racism: “The anti-Semitism stuff just clouds it in my view”. (p373) Instead, they decided to auto-expel him over his alleged membership of the “Communist Party of Great Britain Marxism-Leninism” (they got the wrong CPGB, incidentally) – but he was able to quickly disprove this claim. As party officials “found themselves inundated with emails about the case, including from Jewish socialist groups”, there was pressure to drop the case and rescind his expulsion. Many other, less prominent members, found it much more difficult to challenge their auto-expulsions.

*** We learn that despite some reforms under Jennie Formby, there are huge, ongoing problems with the way the party handles disciplinary cases. For example, the Governance and Legal unit uses a list of “investigatory search terms” to “vet” members, which includes words like ‘Atzmon’ and “a list of 57 (later 68) Labour MPs and their Twitter handles”. In other words, staff “initiate cases themselves by proactively investigating social media comments by Party members” (p17) to create a body of evidence where no basis for a case exists. The report also makes various positive references to Dave Rich from the Community Security Trust (CST), whose views are still being routinely sought as “expert opinion”. But the CST is not a neutral body – it is a pro-Israel charity, which the Tory government started funding in 2015 and has given at least 65 million pounds since.

*** Jackie Walker’s case was deliberately delayed by McNicol and his staff. They were determined to get rid of Tony Greenstein and Marc Wadsworth first in order to build a campaign to justify Jackie’s expulsion. However, the report also states that, “LOTO [Leader of the Opposition’s Office] wanted Walker to be suspended and had briefed the media to that effect”. (p366) In April 2018, “Jeremy Corbyn and Jennie Formby met with the Board of Deputies, Jewish Leadership Council and the Community and Security Trust” and agreed to their demand that “the Party should expedite Ken Livingstone and Jackie Walker’s cases. LOTO and Jennie Formby agreed”. The report quotes questionable evidence by Dave Rich, which implies that Jackie’s views are similar to those of Louis Farrakhan, but omits evidence given by black Jewish Professor Lewis Gordon, a world-leading academic on Jewish/black relations, which contradicts every claim by Dave Rich and supports Jackie’s case.

*** In the case of Chris Williamson, it appears that Jennie Formby was the one driving his expulsion. The report approvingly quotes her long chart sheet against him: “Several of these [complaints], if taken as an isolated incident, may have resulted in no action. However, taken together they add up to a pattern of behaviour that is not only reckless, it has brought the party into disrepute. I would also add that I personally spoke with Chris only two weeks ago and asked him to stop aligning himself with Labour Against the Witchhunt and speaking about antisemitism in the way that he is, because as an MP he does not have the privilege of behaving in the same way as an ordinary lay member does.” (p826)

These examples show just how futile it was of Corbyn and his allies to try and appease the right by going along with some of these injustices – when they should have taken them on in a decisive manner. There can be no compromise, no unity with those who would rather sabotage our party than see a radical Labour movement.