We feature below an important open letter from the Labour Left Alliance. One of the candidates in the current NEC elections supported by the LLA, Carol Taylor-Spedding, has outrageously been accused of holding “openly antisemitic view” – simply for stating in a questionnaire that she feels “inspired” by Jackie Walker and that she opposes her expulsion from the Labour Party. The group “Socialists of Colour” even reported Carol to the Labour Party for antisemitism! Clearly, these are no socialists.

Worryingly, the group has recently been set up and is run by another NEC candidate, Jermain Jackman. He claims that he was not involved in either putting together the questions, issuing the outrageous “content warning” ahead of Carol’s replies, reporting her to the Labour Party or informing journalists about the group’s wich-hunt. But the website does not contain anything apart from their NEC campaign and the group’s questions are clearly designed to support Jermain’s campaign.

After we and the LLA  started complaining, Jermain eventually sought to distance himself from the website – by removing all names from their online presence (see pictures).

But Jermain continues to refuse to state if he AGREES with the actions his own group has taken. This is of course a hugely important question – surely members have a right to know if Jermain, if elected onto the NEC, will defend members from false allegations of antisemitism – or if he will be the one reporting them. The fact that he can tweet about all sorts of things, but will say nothing on this witch-hunt, speaks volumes.

Please forward this information and the open letter to others on the Labour Left.

Open Letter to the group ‘Socialists of Colour’

We are deeply concerned that on your website you describe NEC candidate and Labour Left Alliance supporter Carol Taylor-Spedding as having “openly antisemitic and/or racist views”. You even feature a dramatic “content warning” before listing her answers to your questionnaire.

Most seriously, you do not substantiate on your website which comments of Carol’s you find problematic. Only when asked by the LLA to clarify your serious allegations, you replied that:

“The content warning was put in place due to the response to the question ‘Name one Black socialist man who inspires you, and explain what inspires you about them?’ In which Carol defends Jackie Walker who has been expelled from the party due to antisemitism. As Socialists of Colour we are very much aware of how accusations of antisemitism have been used to silence the left, however, with regards to Jackie Walker this is not the case. We believe that defending or apologising for Walker’s behaviour is an attempt to discredit valid antisemitism claims and is therefore, in our belief, racist and/or antisemitic.”

For the record, this is Carol’s full, original answer to your question:

“Why is this restricted to men? I admire many black socialist women. Diane Abbott, Jackie Walker, Dawn Butler. They have all been subjected to terrible racist and misogynistic abuse but have kept going and remained true to their socialist principles. In the case of Jackie Walker, a black Jew, she has also been subjected to accusations of antisemitism and I believe, expelled unjustly from the party and yet she continues to fight for socialism.”

There was no attempt to contact Carol in order to seek a right of reply, clarification, or the context in which she gave her answers. Such an approach may have cleared up the issue at that point. Instead she was accused of racism on your website and social media and had complaints sent to the Labour Party itself, which potentially could rule her out of the NEC and of the party. We understand from an article on Labour List that you have also reported Carol to the Labour Party’s Legal and Governance Unit, which has now launched investigations.

We believe that you are entirely mistaken in your assessment that this answer constitutes an example of the serious accusation of racism and urge you to immediately take off the content warning. You should also issue an apology to Carol for the distress you have caused her and the damage you have caused to her democratic right to stand for the Labour Party NEC.

Please do the right thing by taking down the accusations immediately and apologise.

We encourage all CLPs to nominate nine socialists for NEC to ensure the defence of members rights and party democracy. (Please check out the LLA website for candidates’ detailed answers) 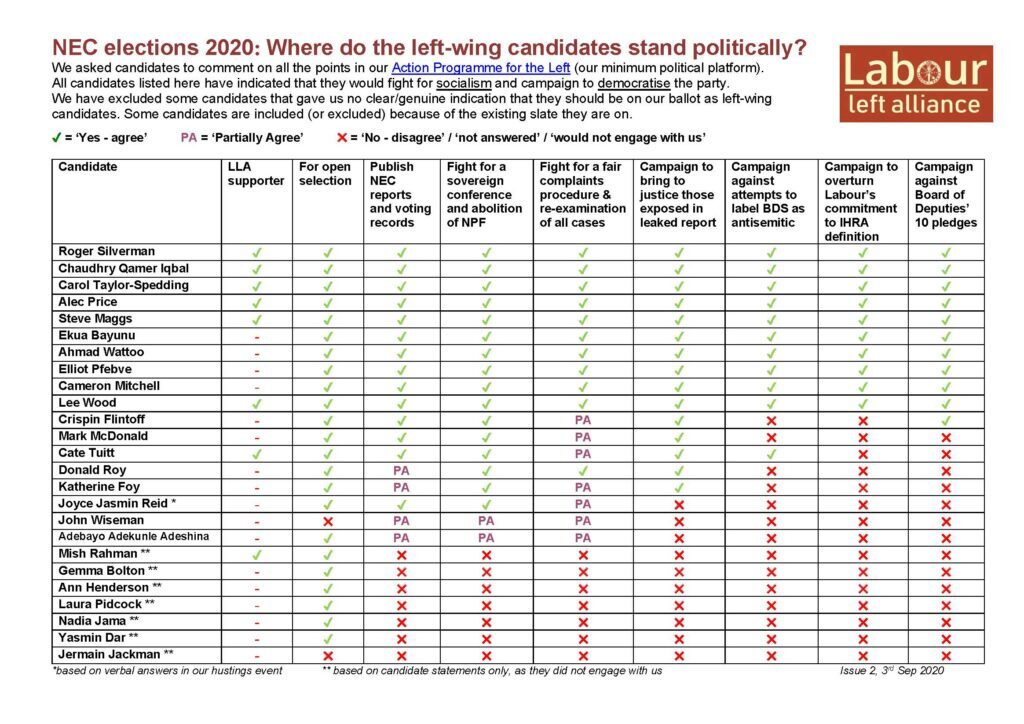 Jermain Jackman
Recent Posts
Categories
Sign up to our newsletter