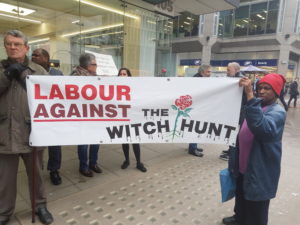 NEC members are responsible for the witch-hunt still being carried out by party officials. Although the independently elected national constitutional committee (NCC) hears disciplinary cases referred to it, ‘automatic’ expulsions are effected instantly by paid officials acting on the authority of the NEC, using the bureaucrat’s catch-all dream of rule 2.1.4.B – a member or ‘supporter’ of any political organisation which is not affiliated to Labour and is not a party unit can be instantly expelled, with no right of appeal. Would that include CND? Or Stop the War Coalition?

That is what happened to me on October 2 2017 – I am a prominent supporter of Labour Party Marxists. In an empty gesture towards fairness, I was invited to “challenge the validity of the evidence” within 14 days, which I did, but I received no reply to my statement, entitled ‘No case to answer’. Likewise, the flimsiest of allegations against Corbyn supporters of bullying or aggressive behaviour, or of anti-Semitism, are accepted as good coin by the Blairite apparatchiks of Labour’s compliance unit. Such allegations are used to justify instant suspension without trial, which may leave the member – such as LAW comrades Jackie Walker, Marc Wadsworth and Tony Greenstein – deprived of membership rights and forbidden to attend their party branch meetings. They could be left in limbo literally for years before their cases are referred to the NCC.

To its shame – as revealed by Tony Greenstein’s successful high court injunction against Labour general secretary Iain McNicol – the NCC, evidently believes it can ignore the drawn out period of limbo suffered by the victims of the witch-hunt, and then finally reveal the exact charges and associated evidence (normally) six-weeks before the actual hearing. An almost impossible time to prepare a comprehensive defence. The high court considered that this procedure violated the duty of care that the Labour Party should have for its members. It is in the power of the NCC – and of the NEC – to do what the LAW lobby demands: drop the charges against Jackie, Marc, Tony and many others; end automatic expulsions and suspensions; and implement the recommendations of the Chakrabarti report calling for natural justice and due process.

Our lobby achieved considerable social media coverage, and LAW chair Jackie Walker appeared on the BBC’s Daily politics show, despite being constantly interrupted by the programme’s rottweiler, Jo Coburn, who did her best to prevent viewers hearing what Jackie had to say. There is no rightwing witch-hunt, Coburn argued (in the form of questions, of course), because the expulsions and suspensions all happened under Jeremy Corbyn’s leadership of the party, and Momentum’s Jon Lansman demoted Jackie because of her alleged anti-Semitism – so the right cannot be responsible.

However, BBC reporter Ian Watson, reporting from the lobby, gave a much more honest commentary. LAW, he said, was lobbying to stop the expulsions of people thrown out of the party for having leftwing views. People who may have been to the left of Labour in its Blairite past and then wanted to come into the party genuinely to support Jeremy Corbyn and are now being chucked out for views they have expressed in the past. Fundamental to this is the question of anti-Zionism versus anti-Semitism. These two issues are being conflated, they say, and people are being accused of anti-Semitism in order to get them expelled.

Thank you, Ian. NEC members, wake up. Jeremy, take note. The witch-hunt is not only against your supporters, it is against you!