Jackie Walker, LAW chair and also suspended on charges of anti-Semitism, explained that, “Labour Against the Witchhunt demands that there should be no more disciplinary hearings in the Labour Party until the recommendations of the Chakrabarti report on natural justice and due process have been implemented. The current disciplinary system is contrary to the ethics of our party, which are about protecting the weak against the strong and maintaining principles of justice for all.”

Veteran anti-racist campaigner Marc Wadsworth – suspended for calling out Ruth Smeeth MP in the event that launched the Chakrabarti report – asked: “Why has John Mann MP not faced disciplinary action? He openly attacked NEC member Ken Livingstone in front of TV cameras, swearing and using vile abuse, bringing the Party into disrepute.” Marc complained that, “It is deeply disturbing that life-long anti-racists campaigners like Jackie and Tony, who are Jewish, and myself, a black man, have been targeted. Yet anti-black racism and Islamophobia, which are more prevalent than antisemitism, have been ignored by the Labour Party.” He added that now LAW has to “work hard to give the new left-wing majority on the NEC the strength, the backbone, to stand up to the witch-hunt.”

LAW honorary president Moshé Machover reminded the audience that suspensions on charges of anti-Semitism amount to “character assassination”, but while he had been accused of anti-Semitism, he had actually been expelled for having articles published in the Weekly Worker and Labour Party Marxists. Under the monstrous rule 2.1.4.B, a member or “supporter” of any political organisation which is not affiliated to Labour and which is not a Labour Party unit can be instantly expelled, with no right of appeal. “I asked them repeatedly what ‘support’ is supposed to mean, but I got no reply.” But after an international protest campaign that saw dozens of Labour Party branches and CLPs issue motions in his support, “the compliance unit suddenly decided that I did not support either organisation or newspaper, when a few weeks earlier they had decided exactly the opposite. Needless to say, nothing had changed in the meantime.” Having been expelled on October 5 2017, he was reinstated on October 30 – and is still demanding an apology from the compliance unit. 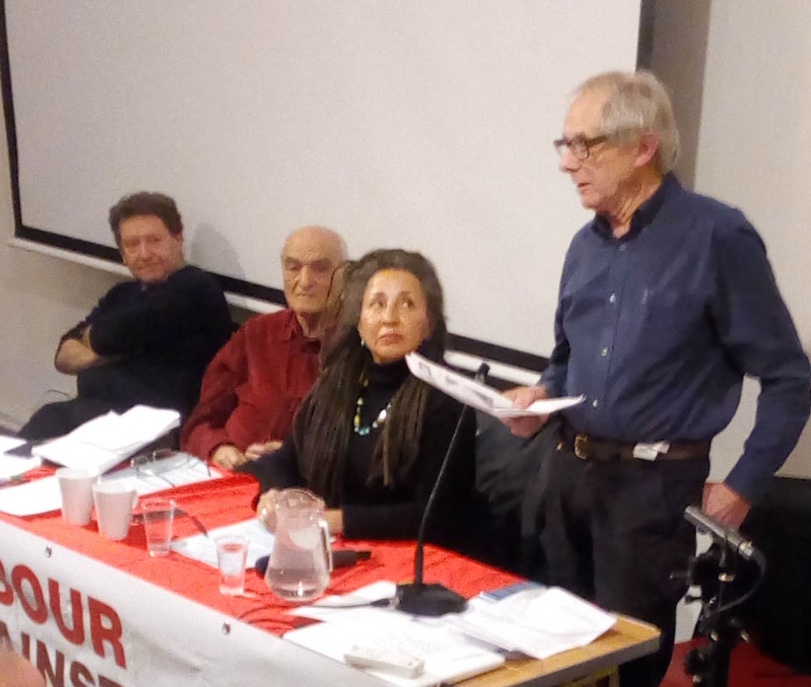 Speaking last, filmmaker Ken Loach said: “I want to begin by saying how absurd it is that we are forced into holding meetings like this.” He was adamant that the witch-hunt against the pro-Corbyn left on bogus charges of anti-Semitism “is a nonsense and we have to be clear about calling it that: nonsense. The witch-hunt is part of the right wing attempt to destabilise the Labour leadership of Jeremy Corbyn and John McDonnell. We need a foreign policy of peace, international law and human rights. When Jeremy became Leader, almost the entire Parliamentary Labour Party refused to serve. They brought the party into disrepute. We would have won the general election with a united party. Many local election pamphlets did not even mention Jeremy Corbyn and omitted manifesto policies. We now need to defend and extend the manifesto. We need to get a new party in parliament. And being a Labour MP is not a job for life. It is the democratic right of members to select their candidates.” Loach suggested that LAW should write to all NEC members to put pressure on them to end the witch-hunt.